The Scrooge in All of Us 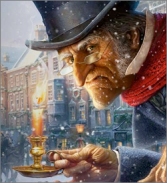 From a storytelling perspective, the Christmas season offers a premium selection of fascinating characters. Depending on which story line you most enjoy, the main characters range from Santa Claus to Mary,Joseph and the Christ Child of the Nativity scene, from Ebenezer Scrooge to the infamous Grinch who stole Christmas.

But often there is “the story before the story”- events that take place prior to the main plots mentioned above -giving the story even greater meaning. For example, consider what the story of Ebenezer Scrooge would be like without the account of the previous miserly life and miserable death of his partner Jacob Marley, who came to warn Scrooge of the three spirits who were to appear to him. In the end, Scrooge is eternally grateful for the visit of this old partner he once doubted.

Well known to many, the Nativity story also has a “story before the story”. We learn of a surprised couple who discover they are going to have a baby in spite of their old age. Zechariah, a devout Jewish priest, is fulfilling his turn burning the incense in the inner sanctuary of the temple when an angel appears to him, announcing that he and his wife Elizabeth will have a son in just a short time, whose name will be John.

Zacharias, who had been praying for this exact thing to happen, is stunned. He is troubled. He is afraid. In his fear and doubt, he utters seven fateful words – “How can I know this for sure?” The angel replies with two seemingly unrelated answers: First, the angel tells him who he is – Gabriel – and WHO sent him – God. Second, the angel tells Zacharias WHAT God’s message is: he will be unable to speak until his child is born, because of his doubt. Immediately Zacharias is struck mute and remains so until the birth of his son, when he writes down with a now-obedient and trusting heart what God had already told him – his son’s name will be John.

If I were to be struck mute every time I  doubted God’s power and ability to do what He has said He will do, I would have been unable to speak most of my life. It is embedded in human nature to doubt. There is a little bit of Scrooge in all of us. Consider Scrooge again – he doubted the reality of Marley’s ghostly appearance and message -“there was more of gravy than of grave about him”!  So Zacharias is not alone in his doubt. And we are not alone in our doubt either.

Zacharias just wanted to know for sure. Does that seem so bad? Why would he be issued such a dramatic rebuke for such a seemingly-innocent concern? The angel Gabriel’s response sheds some light on this. Zacharias wanted to know how God was going to fulfill His promise in spite of their old age. Gabriel’s answers point instead to WHO sent this message – God, and WHAT this glorious message is: their son will be great in the sight of the Lord and will turn many to the Lord their God. For Zacharias, his doubt resulted in over nine months of dealing with the inability to speak. What does my doubt result in?

As I watch the story of my life unfold, it is tempting to always be looking ahead and trying to figure out the HOWs of life – how everything is going to work out. This Christmas, I want to learn from the mute Zacharias and fix my eyes on the WHO of Christmas, the Almighty God of Heaven, and WHAT God did at Christmas when He sent his son Jesus as a Babe in the Manger who would later die on the cross to save His people from their sins. Much like Scrooge, who discovered that he had in fact NOT missed Christmas – it is not too late for you and me to set aside our doubt and embrace the faith found in the very heart of the Christmas story itself. May God bless us, everyone!

At home, Deb is the wife of Mark and mom of three adult children. She enjoys cooking, taking care of a small but somewhat productive garden, feeding the local community of birds and other assorted critters, and taking naps with her dog Mandy. Her passions include teaching, writing and music. In the community, Deb enjoys working alongside her husband in his role as a pastor. She is involved in teaching and encouraging women from all walks of life through book studies, counseling, and speaking opportunities.
View all posts by Deb Ashley →
This entry was posted in Uncategorized and tagged Christmas, doubt, Grinch, Nativity. Bookmark the permalink.

2 Responses to The Scrooge in All of Us